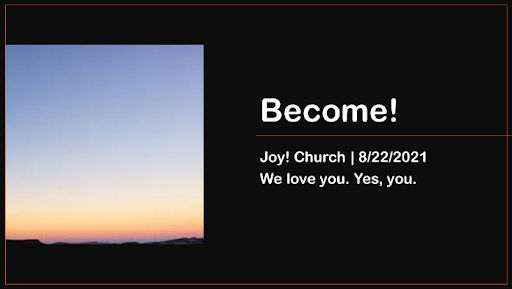 Bob Dylan released a song in 1964 called The Times They Are A-Changin’.  It was prophetic.  It still is.  Anyway, in 1963 when Dylan wrote the song, little could he have known in a short 58 years later how much would have changed.

And yet, it seems the church may actually be unable to rise up. The two largest denominations are currently off the battlefield, necessarily focusing on their deep internal issues. Both of these huge denominations face very significant crises.  Both are seeing significant drops in members and churches as a result.  The Pentecostal stream is also facing notable challenges.

In the U.S., here are statistics widely quoted.  I traced their sources.  I cannot personally attest for their validity but they do seem to originate from credible research.

The fundamental issue is this:  Being of the world and not in it.

Of the world but not in it?  Our charge is the opposite:  IN the world and NOT OF IT.  Start with the book of 1st John. Read John.  Romans, Colossians, Philippians and Ephesians.  Holy Spirit spent a TON of time and energy inspiring scriptures on this very topic. We believe Him.

Jesus spent ALL of His time proclaiming, teaching and discipling on the Kingdom of God.  We believe Him. And we follow Him.  But what can one seemingly small church tribe do?

One time, a nation called the Moabites built up a huge, vast alliance of tribes to pounce on the Israelites and once and for all obliterate a people chosen by God.  It was a massive army.  In a valley near Jerusalem Jehoshaphat defeated them with a few prophetic worshipers.  God shook what could be shaken.  From 1938 to 1948 Israel saw a version of a repeat of that story.

Gideon, Jehoshephat, Moses, Jesus and so many others the bible records… how’d they do it?  They didn’t.  They were instruments.  God did it.  Joy! Church:  Without God we can’t.  And without you, me, us and other likeminded people groups, He won’t.  That’s the clear record.

At the time Jesus lived, was tortured, brutalized, killed and was buried, rose from the dead and then ascended, times were WAY worse than they are now.  Brutality, oppression, domination, wickedness, violence, poverty, evil of every sort.  Paganism, heathenism, religions as or more wacky than all those on the planet today outnumbered the Christ-followers by the tens of millions.  The pantheon of little-g gods represented by Mars and Mammon completely, utterly, unconquerably ruled.

According to scholars, at the time of Jesus’s birth, the earth's entire population was just 300 million, smaller than the U.S. by itself today. About 45 million of those people, including Jesus himself, lived in the Roman Empire, whose borders stretched in Jesus' time from modern-day Portugal in the west to Turkey in the east.  That’s 15% of the worldwide population.

That whole area was turned upside down by a few hundred people. God shook the things that could be shaken.  The ripple effect is that, 2000 years later, the world remains forever better and influenced.  And, but for that, no United States of America and our constitution, would have never existed, let alone survived.  I submit to you that by the time 15% of Americans are turned fully into Christ-ones—followers and not merely fans—not only will our country turn but the Kingdom of God will spread worldwide like wildfire.

So what did God actually do?  He sent Himself.  As a baby.  A baby who grows into a flesh-and-blood man, who lays down all privilege and lives as you and me…just like us—physically, mentally, emotionally, socially and spiritually.  That man conquers sin and death. That man, that son of man, ushers in an entirely new Kingdom.  This Kingdom fully rejects Mars and Mammon, violence, war, twisted capitalism focused on self-interest, and political power.  It’s an entirely different Kingdom of people and nations, founded and operating in an entirely different way, truth and life.

Seeds of that Kingdom were planted 2,000 years ago and are growing voluntarily on the earth wherever the Kingdom is germinating.  It is flourishing and turning things upside down and inside out in hotspots across the world.  Our region is becoming a hotspot.  This Kingdom, and its King will come in full, in power soon.  And there’ll no longer be a voluntarily choice available in the earth.

What do you and I do?  What’s the key?  Become.  Become!  God is looking for His called-out people to once and for all become who they are in Him.  Become the sheep of His pasture.  Know the Truth, become set free by the Truth, and live from The Truth.  To walk in the Way.  And to be Life and Light.  In the same way He did with Gidian, Jehoshephat, Moses, Jesus and the original disciples and the 11 original apostles, He, GOD, will do the rest.

Don’t become partners with those who reject God. How can you make a partnership out of right and wrong? That’s not partnership; that’s war.  Is light best friends with dark? Does Christ go strolling with the Devil? Do trust and mistrust hold hands? Who would think of setting up pagan idols in God’s holy Temple? But that is exactly what we are, each of us a temple in whom God lives.

God himself put it this way:  “I’ll live in them, move into them; I’ll be their God and they’ll be my people.  So leave the corruption and compromise; leave it for good,” says God.  “Don’t link up with those who will pollute you.  I want you all for myself.  I’ll be a Father to you; you’ll be sons and daughters to me.”  The Word of the Master, God.  With promises like this to pull us on, dear friends, let’s make a clean break with everything that defiles or distracts us, both within and without. Let’s make our entire lives fit and holy temples for the worship of God.

It seems unclear to me whether Joy! Church may end up looking like a megachurch.  That’s good.  Healthy.  Because God never said, “Build a church, that’s building the Kingdom.”  He said, “You build My Kingdom, I’ll build the church.”  So we’ll leave building the church up to Christ.  After all, He is the Head of the Church (Col. 1, et al.).  He can do whatever He likes.

That said, there are some pretty clear definitions of church growth in the bible—especially, in Ephesus.  At this stage in Joy! Church’s life we pattern from the books of Ephesians… and Colossians... quite a bit. Growing big people IS growing a big church.

Bear in mind following Christ and manifesting His Kingdom in the earth very often does not feel real comfortable, normal or safe.  Jesus fed 5000… but only 500 followed him after lunch.  Not long after that He said about 4 sentences and 488 left (John 6).  Of the 12 remaining, 1 betrayed Him.  Of those 11, only 3 were present in and at His most critical and deep moments.  And only 1 stood with Him at the cross.  The closer you get to the cross, the smaller the crowd becomes… at least for a minute.

Holy Spirit, as He has done for thousands of years, for generations before you, invites you into the process.  You have likeminded leaders who have bet the farm on God, who are compelled, who are jumping without a net other than God.  And you are among likeminded people, and will be among more who will come.  You will need to become.  Be discipled.  And disciple others.

May the eyes of your heart behold the Living Expression of God, who became a man and lives among us! May you gaze upon his glory, the glory of the One and Only who came from the Father overflowing with tender mercy and truth! May the ears of your heart catch the whisper of your King calling. May you sense the fragrance of Holy Spirit beckoning. May the Lord give you images, visions, dreams of what this could look like for you.

May the holy need God put inside you for connection, for a tribe, for belonging, validation, love, acceptance, forgiveness and new horizons be amplified beyond resistance. May your courage and your discernment grow and grow over time.

May you reach beyond your tradition and your comfort for the touchable, tangible God. May the beckoning of your Heavenly Father become so real, so strong, so lovely, so powerful you fully and completely cave into it.

May you, over the next many months, grow into a disciple who at all times carries joy unending, peace unshaking, authority unbendable and power unstoppable!